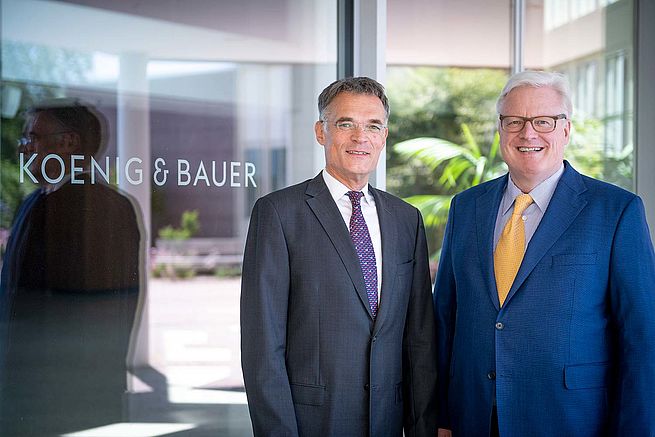 Dr Andreas Pleßke has been appointed as the management board spokesman for Koenig & Bauer AG with effect from 1 January 2021. The company’s supervisory board appointed him to this position, in which he will remain until the end of 2025, at its meeting today. Dr Pleßke is currently the board member for Koenig & Bauer’s Special segment. The top board position has therefore once again been filled from within its own ranks.

Dr Andreas Pleßke succeeds Claus Bolza-Schünemann, who is leaving the management board on 31 December 2020 after reaching the designated retirement age. Bolza-Schünemann has served the company for 28 years, which included nine years as CEO and President.

The supervisory board would like to expressly thank Claus Bolza-Schünemann for his long-standing and exceptionally successful work on behalf of the Koenig & Bauer Group: “The leadership of Claus Bolza-Schünemann, the great-great-great-grandson of the company founder, has allowed the management team at Koenig & Bauer to develop and implement far-sighted strategies. He has guided the company with foresight and sound judgement, also bringing it through times of uncertainty,” said Professor Raimund Klinkner, Chairman of the supervisory board of Koenig & Bauer AG, before continuing by adding: “As a widely recognised expert for printing presses and one of the branch’s pioneering thinkers, he has actively shaped and helped further the drupa trade fair in his role as President.” Mr Bolza-Schünemann will preside over the flagship fair, now postponed until April 2021, as President and act as an ambassador of Koenig & Bauer.

With its decision to appoint Dr Pleßke as management board spokesman, the supervisory board has opted for continuity. Dr Pleßke has made a decisive contribution to the company's successful growth trajectory, having been instrumental to the implementation of the restructuring program Fit@All in 2014/2015 and been appointed as a member of the supervisory board, before subsequently assuming a position as Director and board member for the Special segment. He is now expected to lend a similarly significant impetus to the company's strategic alignment and to increasing the operating profitability and performance of the Koenig & Bauer Group. “This is a very good moment at which to hand over the baton,” as Claus Bolza-Schünemann said. He was pleased to see the appreciation that the supervisory board has for him, as well as the confidence in him shown by the management team. This team can now start the new decade on a strong footing, continuing to shape Koenig & Bauer and remaining a capable and reliable partner to the print industry. “This is important both for our customers and for the employees at our worldwide locations,” he concluded.