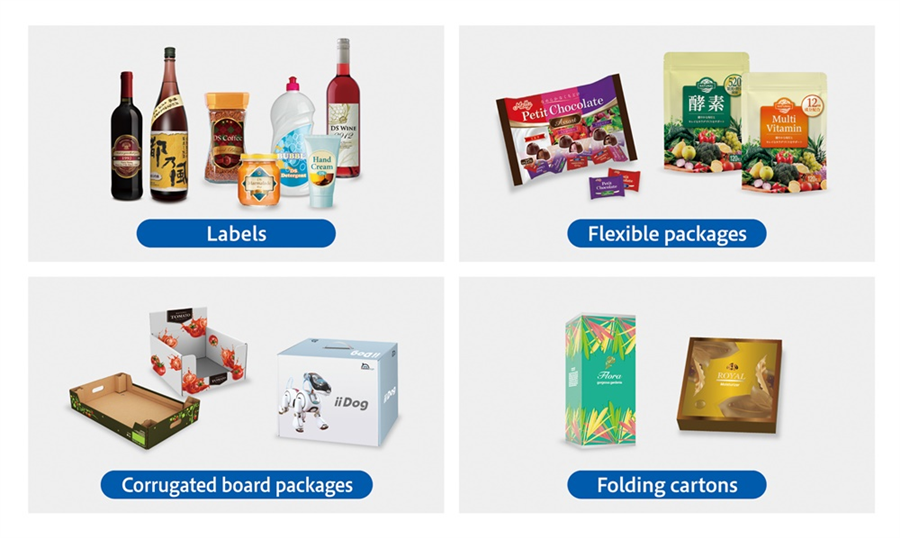 Screen Graphic Solutions Co., Ltd. has announced plans to target the package printing field as a strategic business area and progressively strengthen its product lineup and solution development for this market.

In recent years, the package printing market has been affected by a variety of trends including ongoing shifts in consumer lifestyles, diversification of marketing techniques and growing interest in the UN’s Sustainable Development Goals. These changes have both caused and accompanied movements in the industry itself, such as the rise of on-demand and stockless production as well as diversified and small lot orders and demand for mass customization. Each of these factors has required printing companies to create new value that did not previously exist.

Digital printing has been attracting attention as a new production method with the ability to meet these emerging needs. However, a large number of technical challenges remain in areas such as productivity, stability and processing, and digital systems have so far not achieved widespread adoption within the package printing field.

In response to these requirements, Screen GA has been actively expanding the expertise it has cultivated in its current business areas. This includes the integrated high-speed inkjet printing, image processing and inspection technologies the company has developed for its Truepress Jet520 series of high-speed roll-fed inkjet presses. The series has achieved an outstanding record of more than 530 units sold in the commercial printing field.

Screen GA’s expansion of its expertise has also involved the screening, color management and process automation technologies it has created for its thermal CtP systems, which have held the number one share of the global market for more than 20 years. By combining these unique technologies, the company also intends to provide each area of the package printing field with inkjet solutions of outstanding quality, productivity, reliability, automation and application compatibility.

In line with its strategy, Screen GA recently launched its new Truepress Jet L350UV SAI series for the seal and label printing segment. The lineup is positioned as a new range within the company’s Truepress Jet L350UV series of UV inkjet label presses. The series has already established an impressive record of more than 170 units shipped since its initial release in 2014, growing to become one of the leading ranges in the international market. Truepress Jet L350UV SAI systems deliver both industry-leading print speeds and superior color reproduction thanks to their ability to output up to seven different inks at the same time.

In the flexible packaging segment, Screen GA has also been pushing forward with the development of its PacJet FL830, a new water-based inkjet printing system able to handle full-scale production applications. The PacJet FL830 is currently scheduled for release from around March 2021. The company has also recently released the PlateRite FX1524N/FX1200N and FX870N for flexographic and letterpress printing, as new models for its market- leading thermal CtP series. Sales of the PlateRite FX1524N/FX1200N began in February, with the PlateRite FX870N following in April.

In the corrugated packaging segment, Screen GA has been working with German company BHS Corrugated since 2016 to develop a water-based inkjet printing solution capable of delivering high-speed throughput of 300 meters per minute at widths of up to 2.8 meters. The partners are creating the system in response to growing demand in the shelf-ready packaging and full color corrugated board markets.

Likewise, in the folding carton segment, Screen GA is currently cooperating with UK company Inca Digital Printers, a member of its own corporate group, on the development of a single pass, water-based inkjet press. This system is being specially designed to support the transition to digital printing currently occurring in the segment.

Since its founding, Screen GA has consistently worked to develop proprietary products that combine its core image processing technologies with the latest inkjet technologies. During this time, it has maintained a focus on building systems that offer the superior stability and reliability necessary in production facilities for professional applications. The company is fully committed to providing the type of new printing value required by future generations of society.