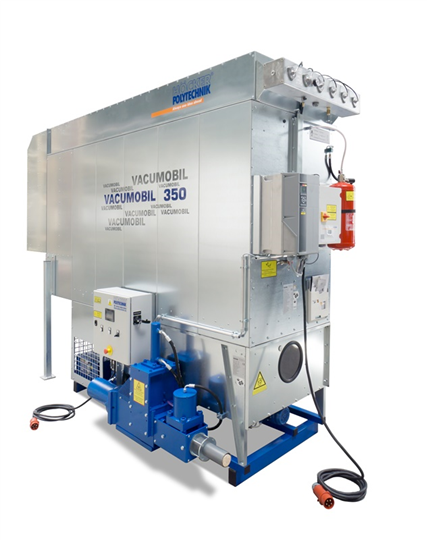 The cost of energy production is growing from year to year - reduced energy costs thus become a decisive competitive advantage. Once the processing machines are started in production, the dust extractor also operates in parallel. A reduction in power consumption for production waste and dust extraction can therefore quickly pay for itself.

Höcker Polytechnik, a company for extraction and filter technology, has been able to reduce the power consumption of its Vacumobil dust extractors considerably by using the modern IE5 permanent magnet motor technology.

The newly developed IE5 Efficiency Powerpack offers an efficiency advantage through reduced power costs with increased extraction capacity of up to 25 percent. This leap in performance is made possible by using permanent magnet motors of the highest IE5 efficiency class in conjunction with specially parameterised frequency inverters. Energy efficiency class 5, or Ultra Premium Efficiency, is currently the highest efficiency class for electric motors. In the Vacumobil dust collectors, this ultra-modern motor type, which is also often used in electric cars, ensures a considerable increase in efficiency.

Höcker Polytechnik has coupled the permanent magnet motor with a frequency converter and adapted the control electronics especially for this motor type. These three ultra-modern components make the 1000 times proven Vacumobiles to the probably most economical dust collectors on the market.

A Vacumobil 350 dust collector with such an IE5 power pack was tested in a six-month stress test in a production plant in real working conditions. The result was convincing: the Vacumobil with the 11 kW permanent magnet motor (IE5) reliably took over the job for which a Vacumobil with a frequency-controlled 15 kW asynchronous motor (IE3) was previously required. However, it effectively consumes 2.5 kW less power. In annual terms, the additional cost of using a Vacumobil with IE5 Efficiency Powerpack can therefore already be recouped. The increased suction capacity offers additional added value.

Energy efficiency is not only rewarded by a lower electricity bill; additionally the purchase of this IE5 Vacumobil dust collector is supported by the Bafa subsidy program.