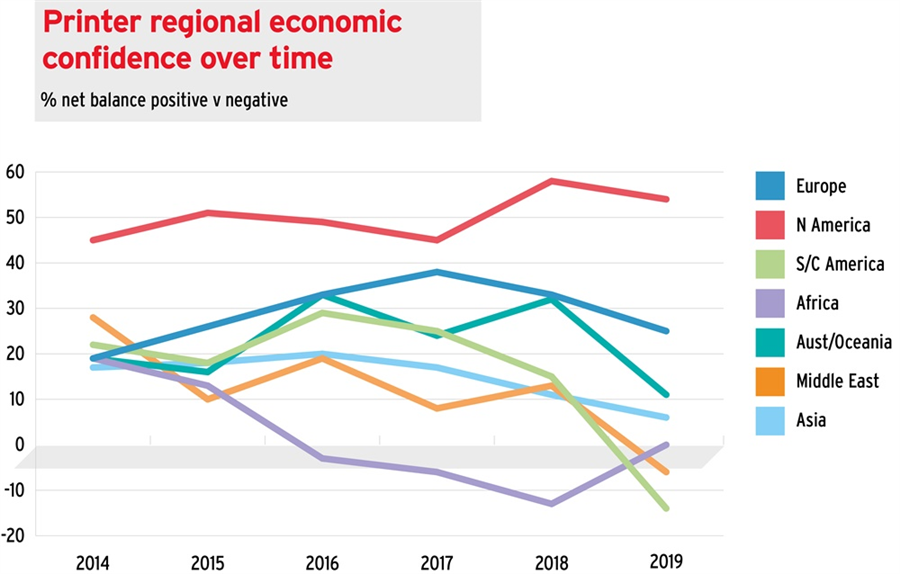 The 7th drupa Global Trends Report will be published in April 2020. The results, from a survey conducted before the outbreak of the corona virus and the postponement of drupa to April 2021, show a global industry that remained positive but reflected more challenging global economic conditions. Packaging and Functional market sectors are better placed than Publishing and Commercial. North America remains buoyant but confidence has slipped in Europe and across all other regions.

Developing regions are held back by concerns about political instability and corruption, while developed regions are nervous of an inevitable cyclical economic downturn. There is constant pressure on margins but increasingly the better companies counter this by continual innovation. Investment plans remain strong, as printers and suppliers all recognise the need to remain competitive.

The findings come from the 7th major annual survey issued last November to the drupa Expert Panel of senior decision takers recruited from printers and exhibitors at drupa 2016 and run by Printfuture (UK) and Wissler & Partner (CH). Almost 600 printers and almost 200 suppliers participated with all regions well represented.

Globally 17% more printers described their company’s economic condition as ‘good’ compared with those who reported it as ‘poor’. For suppliers the net positive balance was even stronger at +32%. However, there is a clear trend with confidence peaking in 2017 after the long slow recovery following the 2007/8 recession and a more cautious approach developing since. As always, conditions vary between markets and regions.

North America stands out as buoyant over the whole seven years of the drupa Global Trends Reports. Europe showed increasing confidence until 2018 but has declined since, while all other regions are in decline. Suppliers’ fortunes follow those of their customers both regionally and by market, although in many cases they have the advantage of serving a wider range of markets and regions.

For several years printers have responded to the constant pressure on margins by increasing turnover and keeping costs to a minimum. Sabine Geldermann, Director drupa and Global Head Print Technologies at Messe Düsseldorf, commented: “Increasingly we are seeing clear evidence that whilst cost reducing steps will continue, printers are recognising the need to innovate – by launching new products and services in their existing markets or by entering new markets.”

Hence, investment plans remain strong with more printers in all regions reporting they will raise capital expenditure next year than those reporting a decrease. Again, the balance of those increasing investment by market was positive for all, but strongest in Packaging then Functional, Commercial and finally Publishing.

Richard Gray, Operations Director at Printfuture, stated: “For the first time we asked specifically about the broader socio-economic pressures and there were two clear patterns reported across the globe. For the developed regions the focus was concern about the risk of, or reality of, economic recession in the country or region, followed by concern about global trade wars and the impact of global warming/environmental pressures. For the developing regions, it was corruption and political instability creating economic recession that dominated. Clearly, we must now add the impact of the corona virus, a concern for all which, however, is not yet represented by the report.”

The industry coped with the last severe recession and will cope well enough with a global slowdown, even though now it will be exaggerated by the impact of the corona virus. The crucial difference is that, in most markets, the industry has adapted their business models to the challenge of digital communications. Investment is the key to keeping ahead of the curve.