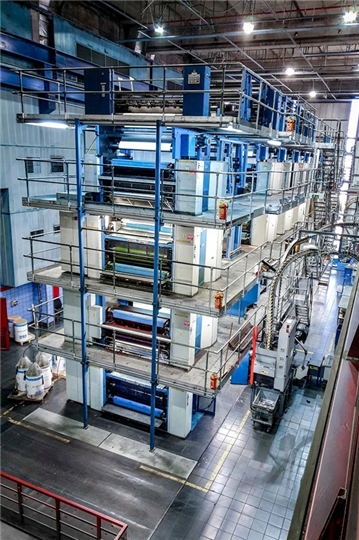 Israel’s largest media company, Yedioth Ahronoth Group, has been a customer of Koenig & Bauer for nearly three decades. Their successful partnership is now reinforced and continued in the long run by moving two Commander machines.

The two systems were moved from the North of Israel into the main print shop in Rishon-le-Zion, a suburb of Tel Aviv. “The move was prepared and organised outstandingly. It was executed in a highly professional manner and with impressive results. We are greatly satisfied with our colleagues at Koenig & Bauer – as we have been for 30 years already,” says Inon Engel, CEO of Yedioth Ahronoth Group. Five Commander presses by Koenig & Bauer are now standing in the main print shop. The two Commander sections that were moved comprise six reelstands and six H-build printing towers with web widths of up to 1520 mm. The systems are equipped with a Patras reel supply, six Pastostar RC reelstands and two KF5 folders.

Jochen Schwab, head of service for projects and contract management at Koenig & Bauer Digital & Webfed: “The project went perfectly smoothly. The great communication and planning on both sides made for a smooth process right on schedule. After all, we moved close to 1000 tons.” Before disassembly commenced, reference prints were made together and kept. The acceptance tests after commissioning proved at least comparably good printing and folding, confirming the quality of the assembly and commissioning work.