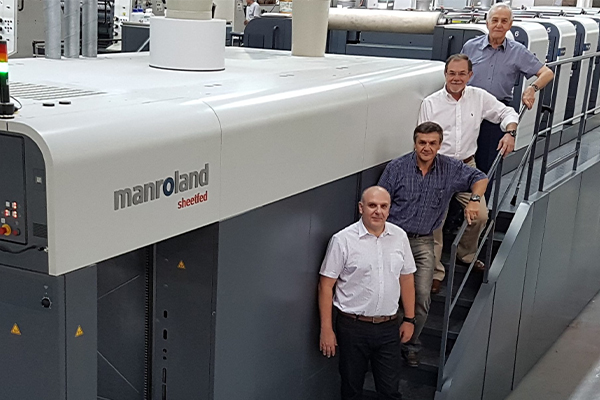 Exactly two years ago, in August 2017, the first Roland 700 Evolution in South America started production in São Paulo at Escala 7, a packaging print company. Escala 7 provides a one stop print service to the packaging industry, mainly folding cartons, to a diverse range of sectors where the highest quality, and flexibility, is required at competitive prices.

“We are very satisfied,” said Antonio Carlos Brusco, Industrial Director, “the Evolution has proved to be very efficient and has the robustness that is traditionally associated with Roland machines”

Loyal to the brand since 1990, Escala 7 now have three Manroland sheetfed offset printing presses, all of them six color. However, this tradition wasn't enough to convince Antonio Carlos and his brothers, Sergio and Luiz Roberto, to purchase their third press in 2017, the new Roland 700 Evolution model, but what did convince Escala 7 was the Evolution's embedded technology, namely a hybrid model set up to work with UV and conventional (infrared) drying. The printing press was also configured with simultaneous plate changing to reduce make-ready times as well as inline densitometric and colorimetric controls and an InlineInspector system.

The standards of quality control demanded by sectors such as pharmaceutical packaging, was a leading factor in the decision to purchase the Roland 700 Evolution thanks to Manroland's new ProService 360º service programme. This is a fresh aftersales approach which is included in the two year warranty period. It involves detailed follow-up of the printing machine's performance, including remote and on-site monitoring (converted in periodical reports of functionality and performance); preventive maintenance; spare parts replacement; and other adjustments and corrections. “We have opted for the package that best suited our needs, and after two years we know we made the right decision,” comments Antonio Carlos.

The partnership between Manroland do Brasil and Escala 7 included total support during the relocation of the customer's print facility to their new headquarters. “Two months after the 700 Evolution commenced production, we dismantled the press and reinstalled it at Escala 7's new building in Diadema, near to Rodovia dos Imigrantes”, says Paulo Sergio Raimundo, President of Manroland do Brasil.

After a short period of time, the Evolution printing press was in full swing at the new plant; which also included the relocation of Escala's existing Roland 700's.