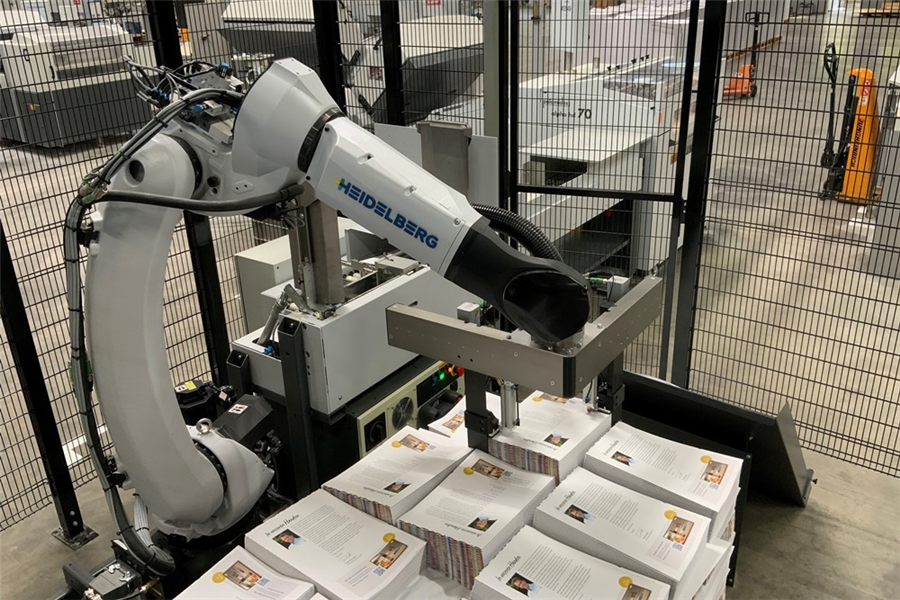 This is, at least according to Heidelberg, just what print shops have been waiting for – the Stahlfolder P-Stacker. The robot technology takes over the signature stacks at the output of the folding machines and places them on pallets fully automatically. Countless customers are now producing using the Push to Stop technology of the P-Stacker launched by Heidelberg last year.

The P-Stacker has been in use at Aumüller Druck GmbH & Co. KG (Aumüller Druck) in Regensburg, and Meinders & Elstermann GmbH & Co. KG (Meinders & Elstermann) in Belm for several months. In both commercial printing companies, this solution is further accelerating highly industrial production lines in Push to Stop mode. Heidelberg was the first manufacturer to introduce the Push to Stop principle to Speedmaster sheetfed offset printing technology and apply it to Stahlfolder folding machines. This is what prompted Aumüller Druck and Meinders & Elstermann to fully integrate their processes into the Prinect technology from Heidelberg – both for automated control and monitoring of their production lines and in the opposite direction, for recording operating data.

P-Stacker boosts Aumüller’s gross output up to 18,000 sheets per hour

The order structure at Aumüller Druck typically involves large volumes split into several small runs. The company prints on four Speedmaster sheetfed offset presses in Push to Stop operation and uses five high-performance folding machines, two Stahlfolder TX 82s and three Stahlfolder TX 96s, which went into operation in 2014 and 2016 respectively. On each of the five all-buckle folding machines, a PFX feeder feeds the sheets to the folding system in an understacked formation.

“Thanks to the Stahlfolder TX technology from Heidelberg, we have doubled our output from 40,000 sheets per shift to 80,000 sheets,” says Volker Dollinger, a member of the management team at Aumüller Druck and responsible for production. With the P-Stacker, production output has now been further increased significantly, by around 25 percent. The Stahlfolder TX 96 can print up to 110,000 16-page signatures per shift. The machine is largely autonomous. For Push to Stop production, the system is informed of the many signature changes via a printed barcode, which is read by a camera in the feeder of the folding machine. It can fold up to 18,000 sheets per hour, which is on a par with sheetfed offset systems. “By eliminating physical tasks, the machine operators are able to maximize the performance of the folding machine to suit the product being folded and the quality of the paper,” says Dollinger.

The workflow is further optimized by adopting the appropriate stacking pattern. Different signatures are detected automatically and placed on separate stacks. For instance, as Dollinger points out, a scheme of five packages per layer is used for pressruns of up to approx. 4000 signatures. Either two towers are formed on one Euro pallet or one tower each on two disposable pallets. If the run exceeds approx. 4,000 signatures, the scheme of twelve is used, with the P-Stacker building one tower of twelve packages per layer on the pallet.

Depending on whether postpress is carried out on a saddlestitcher or adhesive binder, the signatures must be stacked with the first page either facing up or facing down. While this task was previously left to the operator of the folding system, it can now be carried out by the P-Stacker, with its robot arm gripping the packages in the alignment unit either from the front or from the back. Likewise, the P-Stacker can also insert intermediate layers automatically.

Meinders & Elstermann at the forefront of digitization

When it comes to automation, Meinders & Elstermann is one of the pioneers. In 2013, the company piloted a Stahlfolder TX 96 with a shingled sheet feeding system. The next product debut was in August 2018: A Stahlfolder TH 82 was the world’s first folding machine to be equipped with the Push to Stop function, with the system automatically changing from one signature to the next.

Meinders & Elstermann has now taken another step towards maximizing its net production output, by equipping two Stahlfolder TX 96s and a Stahlfolder TH 82-P with a P-Stacker, thus clearing the final hurdle to fully automating this process. Thanks to the robot, the Push to Stop mode of production can be used to its full potential on the folding machines. “With this solution, we are aiming to increase our overall equipment effectiveness (OEE) from 40 to 60 percent across the entire production process,” says Jens Rauschen, Managing Director of Meinders & Elstermann.

The company commissioned the first P-Stacker as a pilot customer. The results spoke for themselves. The Stahlfolder folding technology was at least fifteen percent faster than machines without a P-Stacker. This prompted the company to equip two more folding machines with the solution.

The production lines on the two Stahlfolder TX 96s are monitored by just one person, while the employee on the Stahlfolder TH 82-P works on a Polar PACE cutting system in parallel with the folding machine. “In the past, our employees had to move up to six tons of paper in one shift on the folding machines,” says Jens Rauschen. “We now leave all this heavy lifting to a robot.“

The pressruns at Meinders & Elstermann vary greatly, with the signatures of several different orders often being placed on one pallet. In terms of meeting delivery deadlines to the best possible extent, the most time-efficient workflow for producing print sheets on the Speedmaster presses or outputting printing plates on the Suprasetter is determined by the postpress. This is a very advanced form of digital workflow control, and the P-Stacker plays a key role in this seamless process – one that Rauschen highly values: “The Prinect technology and the production solutions from Heidelberg help us ensure that we can print in a standardized manner, while still staying true to the individual nature of the customers’ orders.”

Jörg Dähnhardt, Head of Postpress at Heidelberg, adds: “By combining the P-Stacker robotics with our Stahlfolder folding machines, we are closing a significant automation gap and are driving forward autonomous print production and the Smart Print Shop.” 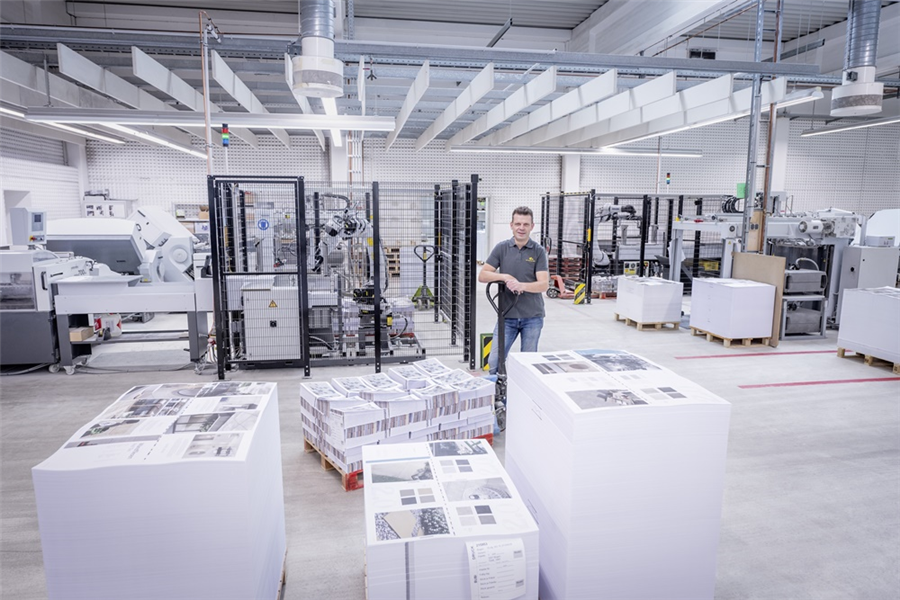