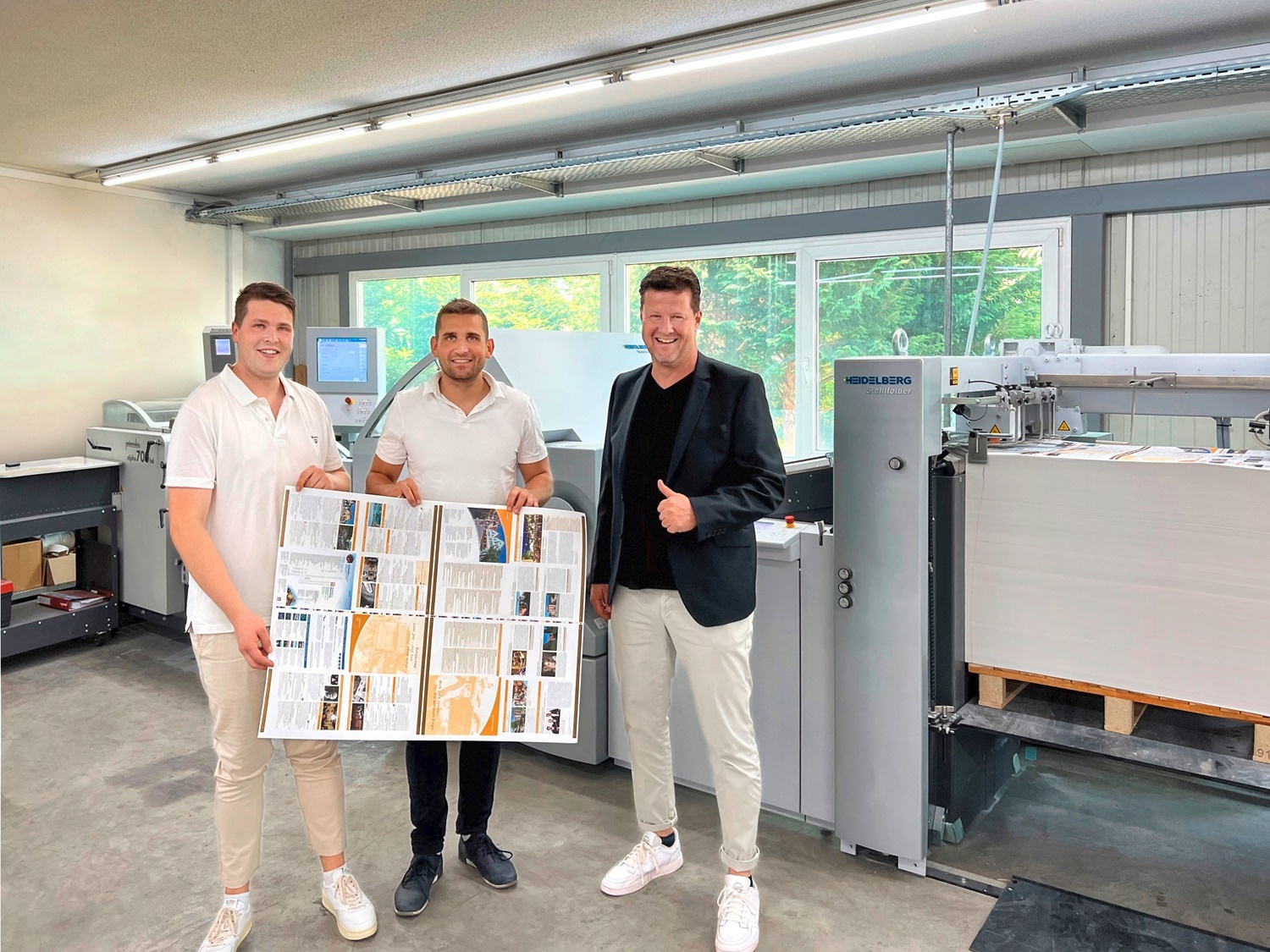 Druckhaus Müller OHG is based in Langenargen on Lake Constance in Germany. Founded by Josef Müller in 1978, this second-generation family business is now run by his sons, Marius and Pius. Druckhaus Müller OHG’s product portfolio includes typical commercial jobs and small, folded inserts for confectionery packaging. Weekly and monthly periodicals are a further focal point.

From the time the data is received right through to the point the end product is ready for shipping, everything takes place in-house using production technology and software from Heidelberg. That includes a Speedmaster XL 106 with Push to Stop technology. “Druckhaus Müller and Heidelberg have enjoyed a close partnership for decades. The print shop has regularly invested in new technologies to ensure it remains competitive,” says Mirco Klumpp, who is responsible for sales and customer service at Heidelberg.

Following investments in new printing systems, Druckhaus Müller OHG updated its postpress operations at the end of last year. The company invested in two fully automated Stahlfolder KH 82 combination folding machines, each with four buckle plates, a cross-fold unit, and a pallet feeder. They replaced an existing folding machine of the same model type and a Stahlfolder KH 78. The investment also included a Polar N 115 PRO HD cutting system, complete with all the peripherals for supporting layer and pile logistics.

By modernizing the folding technology and moving to a standardized infeed width, Druckhaus Müller has significantly improved its production flow. “Previously, we often had to interrupt long runs on the KH 82 because of urgent, smaller jobs. That created a great deal of makeready work and had a very detrimental effect on the net output of the folding process,” says Pius Müller.

A further factor to consider is that the timeframes for some periodicals are very tight. The final data arrives at the print shop at 4 p.m. and the finished products need to be ready for shipping at 9 a.m. the next morning. Reaching production speed quickly and ensuring a stable process throughout all stages of production are an absolute must. “Our ability to deliver on time is one of the strongest sales arguments we can offer our customers,” insists Marius Müller.

Druckhaus Müller has created the prerequisites for this with its latest investment. One of the combination folding machines is largely reserved for the longer runs, while the smaller jobs are completed on the second machine. Using the control terminal to set up the Stahlfolder technology is a quick and easy process. Servomotors adjust the folding rollers, buckle plates, and cross-fold unit to the required dimensions fully automatically. The faster makeready processes have a particularly positive impact on productivity in the case of short runs, the number of which is growing strongly. “The two new folding machines are around 35 percent more productive than our previous folding technology,” confirms Marius Müller. The increased output means the company now has the in-house capacity to boost added value by handling jobs that it previously had to outsource.

“When it comes to productivity, postpress remains a bottleneck at many print shops. The latest-generation Heidelberg folding machines can be integrated into the Push to Stop concept for autonomous printing and significantly boost the productivity of the overall process,” says Stefan Dettke, Head of Postpress Commercial at Heidelberg.

The production process is also geared towards being as eco-friendly as possible. The use of chemicals is minimized when developing printing plates, the print shop’s sheetfed offset presses use Saphira Excel Bio inks, and the dampening water contains a greatly reduced proportion of alcohol. A photovoltaic installation on the print shop roof converts sunlight into electricity. Since Druckhaus Müller installed the system around twelve years ago, it has generated over three million kilowatt-hours of electrical energy, thereby reducing carbon dioxide emissions by some 3,600 metric tons. 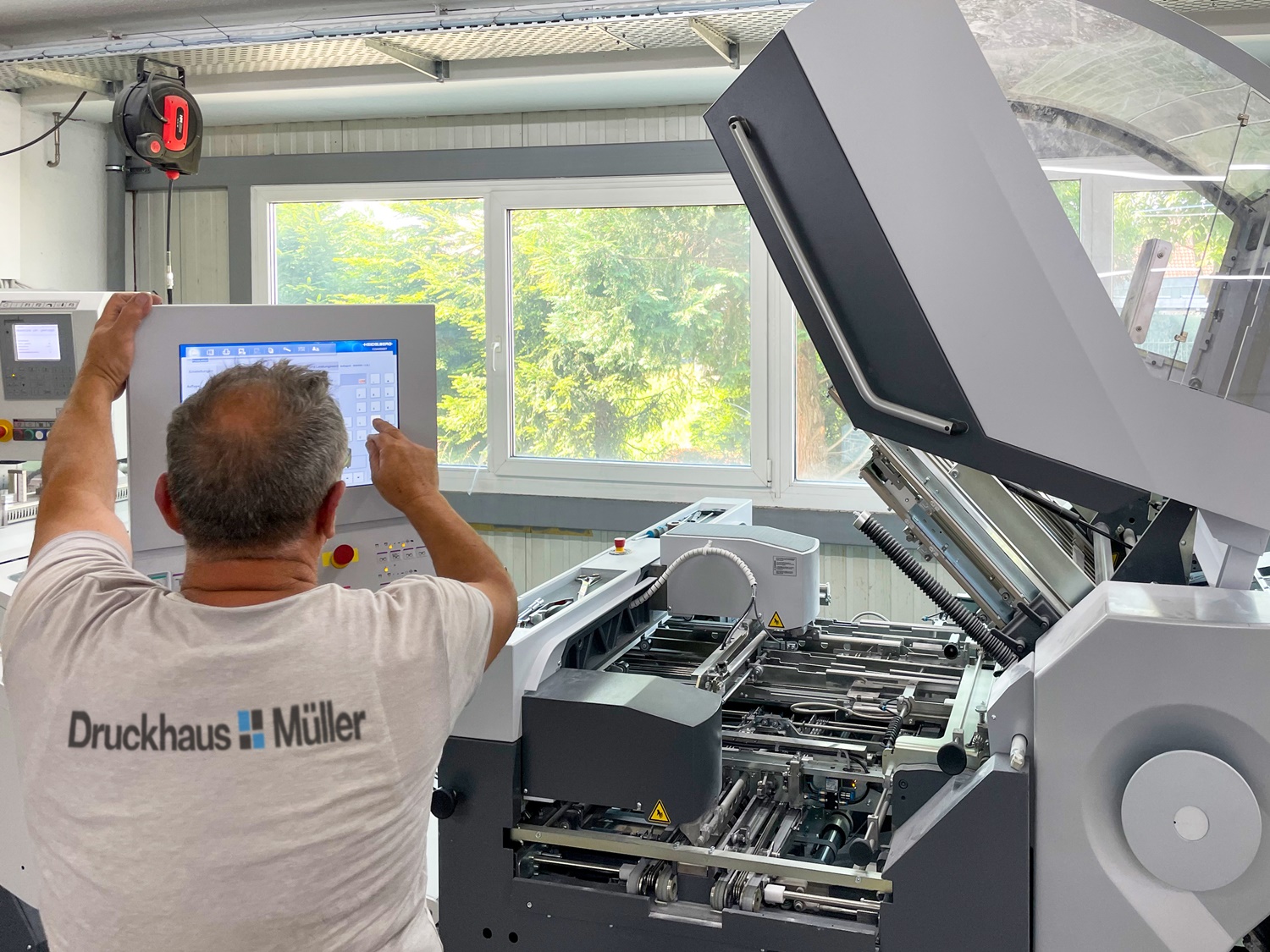