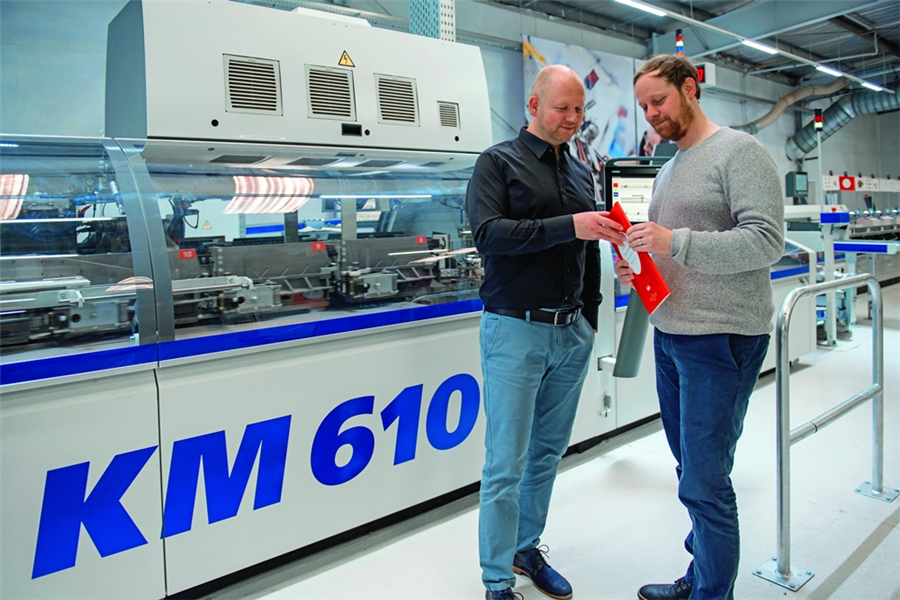 Sixty Percent Is the Magic Figure

Germany’s Kern GmbH wants to increase its softcover production from 2.5 million to 4 million copies within a year. The KM 610 perfect binder will help the Saarland-based company achieve its goal. Although the family company, located in Bexbach near Saarbrücken and founded in 1862, may be traditional, it is also innovative. This was once again demonstrated last December with the commissioning of a new Muller Martini Kolbus-brand KM 610 perfect binder.

This will give the company, led by brothers André and Holger Kern, the opportunity to produce four million softcover products under its own roof in 2019. Previously, the company produced one million products offline at its own facility, some with a manually operated system, with another 1.5 million copies produced by external partners.

With 60 percent more volume, softcover productivity is even increased by a factor of ten because the company, which has 120 employees, is able to substantially increase its binding speed and therefore reduce the number of shifts. The investment in the KM 610 perfect binder was necessary because orders over the past year have grown steadily. “For example, we are again seeing more orders for product catalogs from industrial customers throughout Germany because they're taking their customers more seriously again by providing them with a print product to leaf through and make notes in, instead of sending them into the online ether," says André Kern.

At Kern GmbH, the KM 610 is being used to bind offset and digitally printed products, and it has a 20-station gathering machine, PUR, an HD 143.P three knife trimmer, and a KL 301 compensating stacker. It has two main advantages: As André Kern notes, “It is highly productive for long runs, and can be quickly changed over for short runs.” This is critical for his company because its softcover range, which is mainly offset printed, is highly diverse and ranges from 100 to 100,000 copies, with an average of 5,000 copies per job.