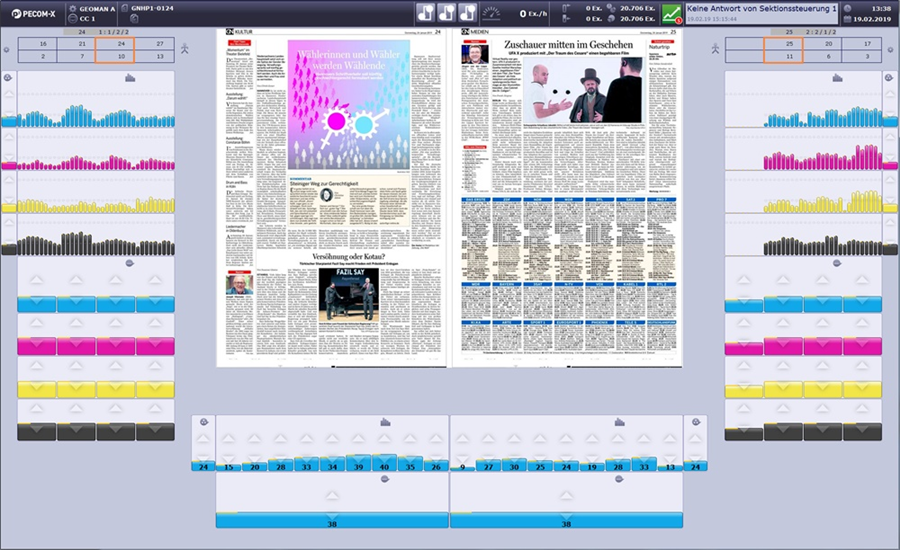 In Nordhorn, Germany, a PECOM control console has been virtualized for the first time. In the near future, print jobs at the Grafschafter Nachrichten will be controlled via the intuitive ControlCenter from manroland Goss web systems (MGWS). The biggest benefits attained are the user-friendly operator interface combined with additional gains of production relevant information.

The ControlCenter interface has been implemented on the existing control consoles, meaning that the existing console, including the embedded keyboards, remain in place. A central touch-screen based ControlPad complements the control system. It virtualizes and controls all integrated components and displays their current status, which means all product-relevant information is centrally visible, in real-time. Correction of settings is carried out directly on the touch screen. Furthermore, it is now possible for the MGWS TeleSupport Center (TSC), to perform remote diagnostics.

In addition, IDCµ, the “fastest ink and dampening solution control system on the market”, is also in operation in Nordhorn. Ink control can be left completely up to the IDCµ module. Therefore, even a small team of press operators can produce jobs on the press at new levels of accuracy and efficiency.

The benefits of this comprehensive retrofit are clear: converting the control system enables significantly improved system performance with reduced downtime. IDCµ also contributes to a reduction in labor and material costs. Fact is: the retrofit secures press availability for many years to come, and simultaneously reduces operating costs significantly.

Maik Hofsink, Head of Operations at the Grafschafter Nachrichten, is delighted with the supplied control system and the new, highly intuitive control console operation of his Newspaper printing press.

During a Technology Forum at the beginning of April in Nordhorn, a small group of branch experts from within the German speaking regions were introduced to how upgrades and retrofits of existing systems could increase their printing efficiency onsite. During the Technology Forum titled “Innovations in Newspaper Printing”, there was a live demonstration of the virtualized PECOM system in the printing hall at Grafschafter Nachrichten, along with comprehensive information on the technical implementation of the virtualization.