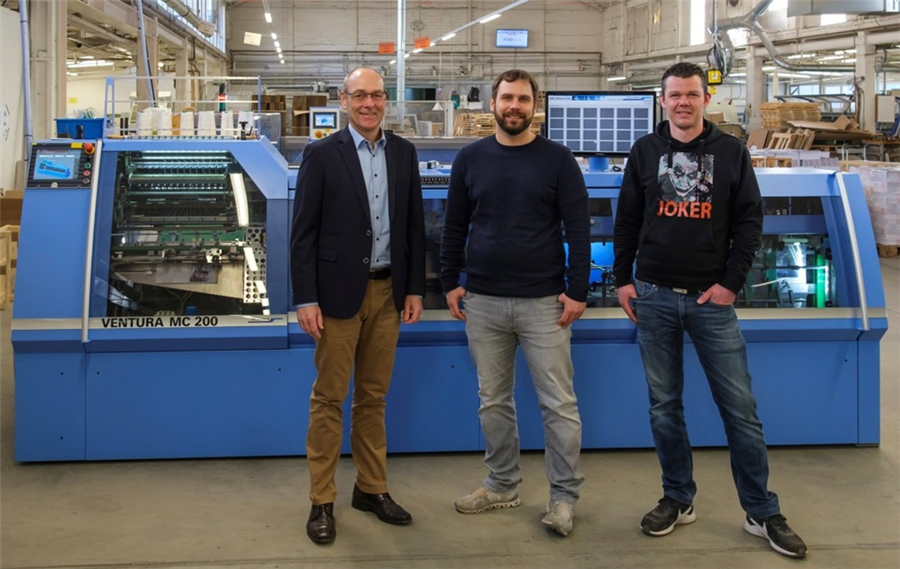 To compensate for lost sales in perfect binding and saddle stitching, Richard Wenig Buchbinderei GmbH in the German capital Berlin recently made a new entry into thread sewing. In addition to a Ventura MC 200 book sewing machine, the family-owned business also invested in the VFN 700 fold down press launched by Muller Martini a few weeks ago.

It is true that the bookbindery founded by Erich Wenig shortly after World War II already had a thread sewing machine two decades ago. However, because the family business then concentrated fully on softcover production and saddle stitching and now uses two Muller Martini systems in these two segments, a KM 610 (installed in 2014) and a Primera (2016), the thread sewing machine was decommissioned. Last November, however, the “supreme discipline” in finishing celebrated a comeback at the Berlin company with the commissioning of a Ventura MC 200.

According to Richard Wenig, the reason for this was declining sales in the two business areas of softcover and saddle stitching. “These began before corona, but were accentuated by the pandemic,” says Managing Partner Richard Wenig and great-grandson of the company's founder. “That's why we decided to (re)enter thread sewing last year. On the one hand, to compensate for the shortfalls with a new portfolio. On the other hand, to also be able to offer thread-sewn products to our many loyal regular customers.” Admittedly, the traditional company, which also offers handbook processing as a niche managed by Richard Wenig's mother Grit Wenig, was in the red last year because of Corona. “Nevertheless – or precisely because of this – we dared,” says the trained bookbinder, “to invest in a new machine.”

The fact that the choice fell on Muller Martini with the Ventura MC 200 is not only due to the Berlin bookbindery's good experience with the KM 610 and the Primera. “I was particularly convinced by the demo of the machine at the Muller Martini plant,” emphasizes Richard Wenig. The new Ventura MC 200 at Wenig Bookbindery has an extra feature with the TWE¦?N® option that adds significant value. It enables smaller folded sheets – so-called tween sheets – to be stitched into a book block.

Reducing spine pitch with the VFN 700

A third plus point is the VFN 700 fold down press, which is connected inline with Ventura MC 200. It reduces spine pitch – also known as mushrooming – during thread sewing and ensures that the book block goes cleanly into the perfect binder. “It allows us to avoid another work step with a manual or semi-automatic press, keep the logistics factor as small as possible and produce more economically,” emphasizes Richard Wenig.

The new production segment of Buchbinderei Wenig quickly found favor with print shops, mainly from the two German states of Berlin and Brandenburg. Two months after commissioning the Ventura MC 200, thread sewing already accounted for 30 percent of the sales volume. “The Ventura keeps us afloat,” says Richard Wenig with satisfaction. “We don't know where the journey is going – but the Ventura makes the journey easier and more realistic.”